There is nothing like the classics. In a world of iPads, Kinect-ified 4D video games and interactive everything it’s kind of hard to get the kids to enjoy some good ol’ fashioned, undistracted family fun. No one ever wants to go anywhere. And when they do, they are on their phones or tablets have their version of family time. Which consists of texting their friends, taking “usies” and only tearing their eyes away from the phone when absolutely necessary. Well, I’ve got a solution…if you live in Southern California. I’ve got a family four pack of tickets to the Harlem Globetrotters during their 90th Anniversary season. What I love about the Harlem Globetrotters is that there is something for everyone. I mean it’s obviously doing something right if it’s been around for 90 years! I know kids who don’t even like basketball or know anything about it, but love going to see The Harlem Globetrotters.

*From the press release*

Known worldwide as the Ambassadors of Goodwill™, the Globetrotters are giving back even more during their 90th year with The Great Assist program. Stars of the team will leave a mark in communities across North America with acts of goodwill during the tour that is set to play over 330 games in 260 cities.

Tickets for the southland shows can be accessed at harlemglobetrotters.com. 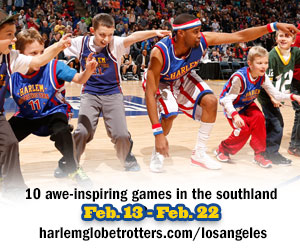 But first, try to win your tickets here! Unless, you need more than four, then definitely get your tickets now! Think of a target date and then enter to win!

Enter through the Rafflecopter below to win!