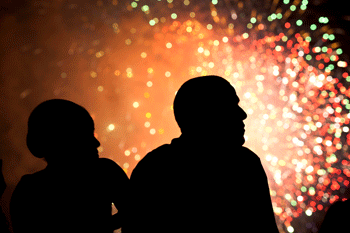 On this day in 1776, The Declaration of Independence was adopted by Congress. This was

two days after The Second Continental Congress voted on a Resolution of Independence originally proposed by Richard Henry Lee of Virginia (June 1776). The signing was actually done on August 2, 1776. But we celebrate the day it was approved as was predicted by (future) President John Adams in a letter he wrote to his wife, Abigail. He stated that for years to come on the second of July people would celebrate with parades, pomp and circumstance. Okay so he was off by two days, but give the man a break…they didn’t even have a telephone then! Shout out to Mr. D. LaFrainere for his 8th & 11th grade American History lessons! Clearly my time in Room 512 with his red pen bleeding all over my notebooks & reports has paid off!

Okay so now that that is out of the way…LOL! Let’s celebrate! Fireworks! Ribs! Watermelon! Potato Salad! And Coconut water! Wait…what? Coconut water?! Don’t laugh! It’s freakin’ hot out here!! This is my first Fourth of July

in years not spent in absolute pain, yet I’m still a bit drained from the heat. So what does that mean? That means I have stocked my fridge with Smart Water, Happy Family Coco Squeeze & Watermelon. And a freezer full of Homemade Natural Organic Yummy Popsicles is always lovely! The Zoku quick pop maker is a definitely a summertime must have for that! The name of the game is hydrate, hydrate, hydrate! Staying in the cool water and I’ll probably stay away from the alcohol until later…yea I said later. I can’t not have a little slushy adult drinky poo. Come on now, I’m Creole. My family is from the birth place of The Original New Orleans Daquiris 190 Octane!!

Now, because I’m a nerd and I like to make sure my kid understands why we celebrate things and not just get caught up in the pomp & circumstance, I squeezed in some fun history lessons. Usually I do this leading up to the holiday…but the last few weeks have been a bit cray cray. So this morning I hooked up the iPod to the television and we watched some School House Rock: History Rock. Then I searched YouTube for Animaniacs episodes on The Presidents, Wakko’s America & Yakko’s World (why because once you show them the states, questions about the world come up). I actually forgot how great Animaniacs was. Think I need to find a DVD collection for sure! My mom told me a Histeria! was a good one as well, but couldn’t find it online. And This is America, Charlie Brown is another good one. We had a small discussion about the revolutionary war.

I’m sure most of it went over his head. I don’t care how smart your preschooler is, at the end of the day they are just waiting for the popsicles and fireworks! But I feel better about planting the seed and will watch it grow every year. Happy Fourth of July everyone!!