Day 4 rolled around, and I found Hippo to be just as excited about Wednesday’s events as he was about the first two days. But Wednesday was something special. On this day we got to the venue quite early. So we decided to hang out in the UBER lounge for a while. Yes, the UBER Lounge. One of the great things about the DNC event was the convenience. Uber had worked out a contract with the convention where they would provide transportation to some the attendees. They had an air conditioned tent with water, snacks and charging stations. Perfect spot for a tired mama and her little Hippo. 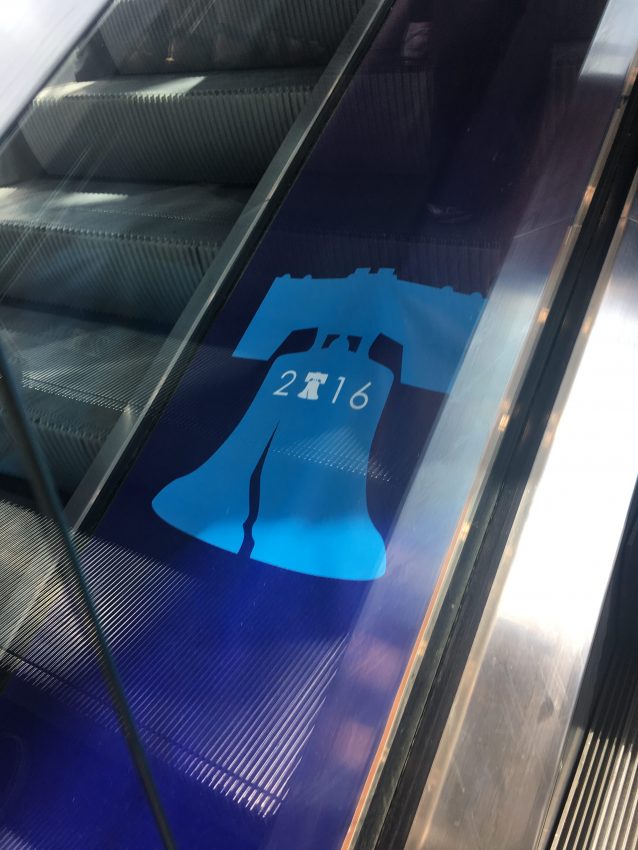 While in there I noticed a man looking back at Jaxon frequently. He had a huge camera in his hand and look of question on his face. Then he snapped a few shots of Jax. Looked at his camera and smiled. The man looked up and started looking around for something. His eyes landed on me. An he approached. “Excuse me?”, he starts,  “Are you this child’s mother?” I answer, yes. And he proceeds to apologize for taking Hippo’s picture with out my permission, but he just thought Hippo was so cute sitting there reading in his vest and Yoda backpack. We chatted for a little bit and then he ended up interviewing Hippo for USA Today. Unfortunately my little HippoMaPotomus didn’t make the editor’s cut. But, that led to us seeing some nice ladies we met the day before from the Auto Lobby. They invited us back to their tent to chat, snacks and water. And then we headed to the Arena to get settled before the show started. Hippo loved being in the hall when the gavel went down! #NerdAlert 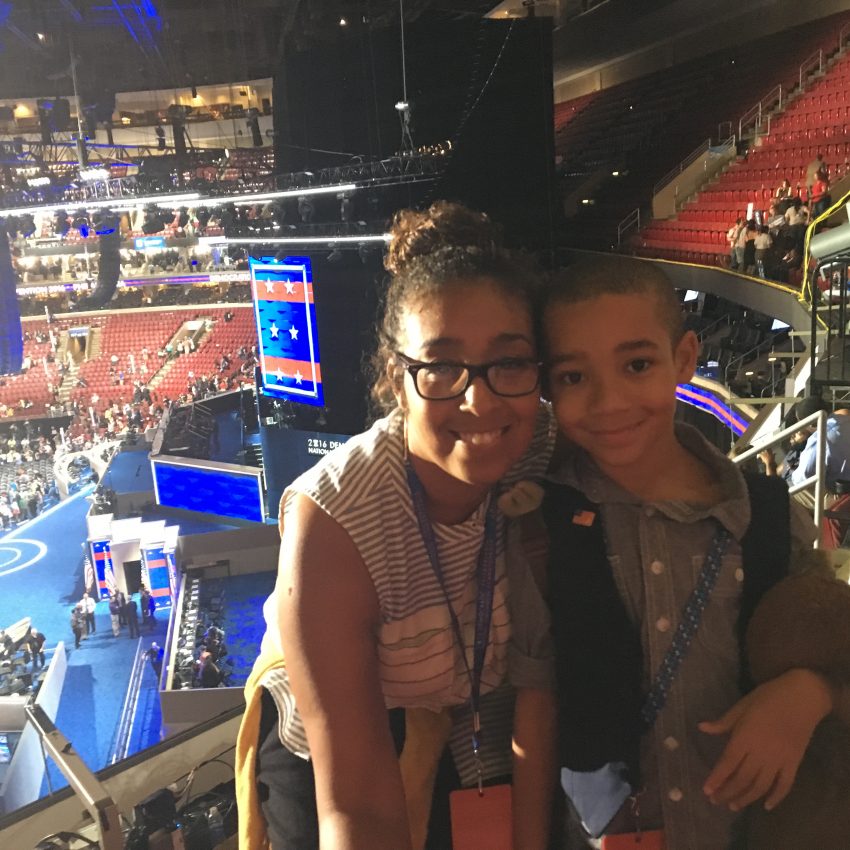 But this was the day. The day Hippo said he had been waiting for his whole life. Well, this day and the opportunity to meet Wolf Blitzer. But this day was going to be epic. On this day, Hippo’s best friends, President Barack Obama and Vice President Joe Biden would be speaking live. And it would be the first time Hippo had ever seen his best friend’s speak live. It would be the first time he ever saw his best friends live, in person…period. LOL! That’s right, Hippo is BFF’s with The President and Vice President…without even meeting them. So, this day was going to be everything! 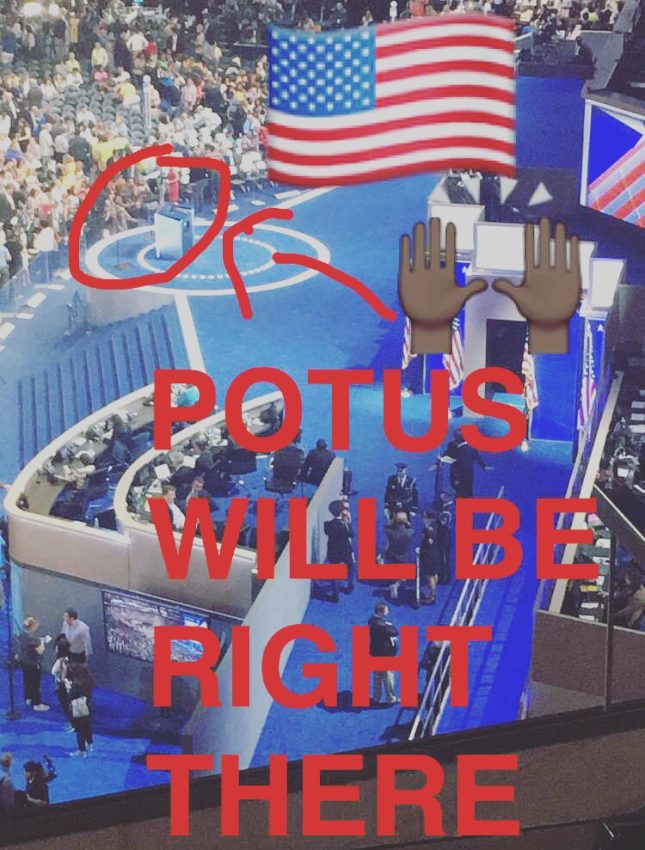 Hippo got a nap in, read a few chapters of Harry Potter and played some games on his phone while tuning into some of the speeches through out the day. One thing I learned about him this trip is that my son is incredibly good at multitasking. He could be completely 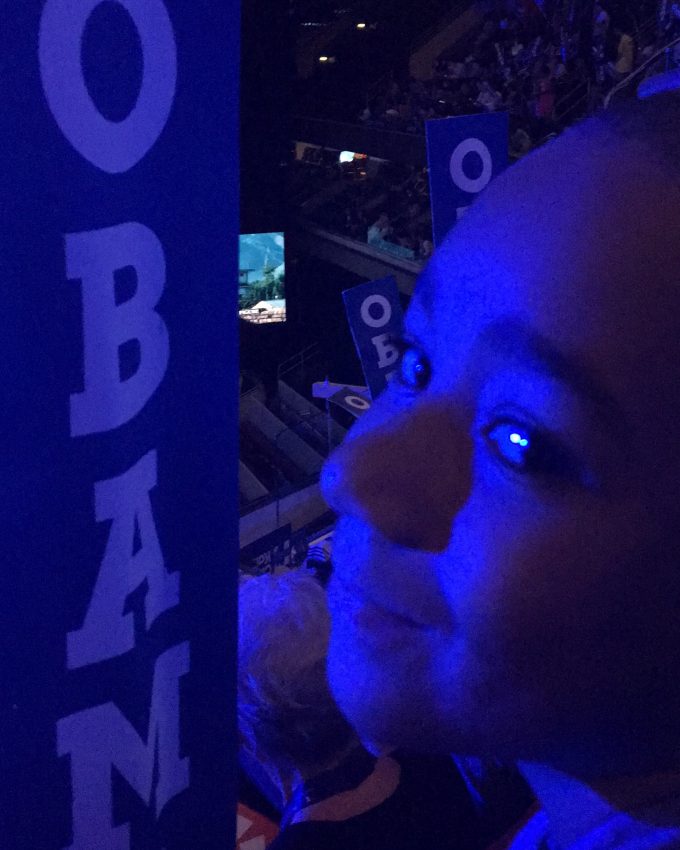 engaged and enthralled in the book he’s reading, and also pick up on every single word that is being said around him. Or in this case in front of him, on the stage. Hippo quoted speeches, agreed and cheered appropriately, all while playing a Pokemon game on his phone! Still not sure how I feel about that. I mean the breech in mommy privacy has probably already occurred. But finally, it happened. The video on Joe Biden began to play. My son put away all things, grabbed his sign and sat on the edge of his seat. When Vice walked out of the side of the stage, my son went NUTS! I felt like I was at a Michael Jackson concert with him. He was jumping and screaming and laughing and then came the water works. That’s right, half way through VP Biden’s speech, I found a Hippo in a fit of tears. And those tears of sadness, turned into grumpy gramps. He actually got mad. His arms folded, face scrunched and he refused to look at the stage. When I asked him what was wrong, he burst into tears. Screaming out, “They are leaving! I don’t want them to goooooo!!!!”

It was then I realized just how emotionally frustrating this all must be. The Obamas and the Bidens have been all that our kids have known. And because both the Bidens and Obamas have entered our homes, iPads and schools through our favorite shows, radio shows, and cartoons, we have a connection with them that is a little more personable than previous Presidents and Vice Presidents. My son has grown up learning about what 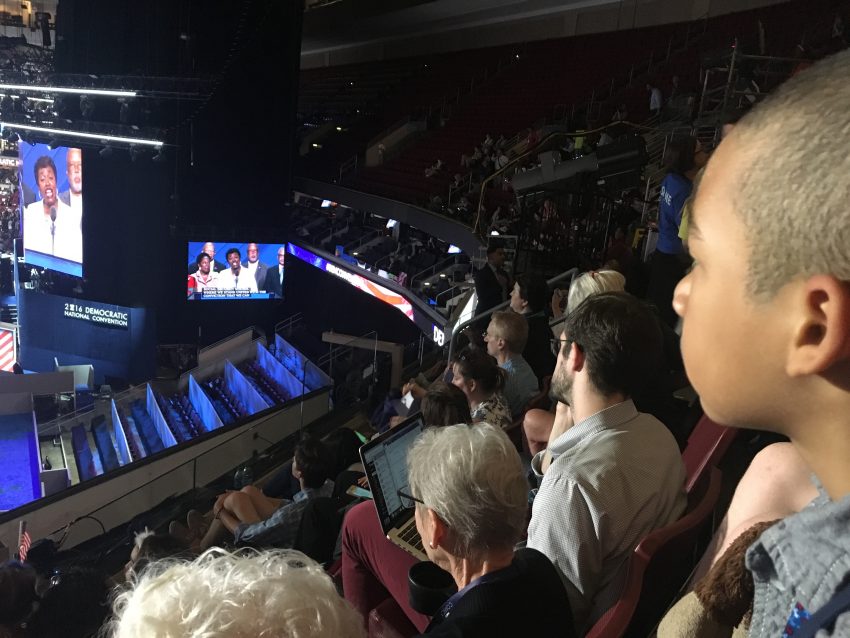 vegetables grow in the White House garden through the First Lady and dancing with her on Nickelodeon. They have daughters that he has crushes on. Vice President Biden wrote him a letter and reminds him of our uncle. These men are two men he not only hold a position of power that he dreams of holding, they have also been apart of his life and education. For his entire life. Watching them leave, and not really understanding what happens after a President leaves the White House, really affected Hippo. He felt the loss so deeply that he began to resent this pseudo farewell speech by the Vice President. A feeling that was combatted by the our excitement he felt about the candidate he’s been supporting for President since before she announced she was running. My 6 year old was torn and completely overwhelmed. All I could do, was hold his hand as he cried, “First I lost, Charlie (his best friend who moved away). Now I am losing Obama & Vice! It’s not fair, mom! It’s not fair!” My heart hurt for him. It truly did. Usually he’s so mature and understanding, but now, for once he was just a 6 year old who didn’t understand adult life. And for once, he needed just a simple hug from his mama. So while Vice took his walk and wiped away tears, Hippo waved and blew him kisses from his seat. “Goodbye Vice! Thank for everything! You’re still my best friend!” 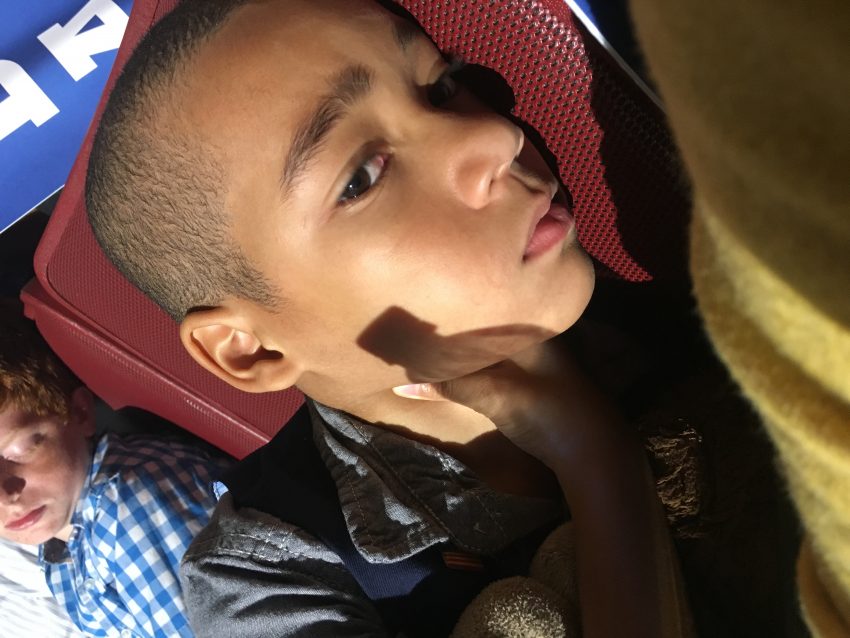 As the moments ticked down for the President to take the stage. I feared that we would have a repeat of an earlier episode. Until I saw him and some other kids making faces as someone. It was the President, two seconds from walking out. And of course he spotted the kids screaming, “It’s the President!” Hippo was once again on his feet losing his marbles. Screaming and cheering. But again…half way through…came, “The Face”, the crossed arms and the slouch in the chair. He said, “I don’t want to hear anything he has to say because he’s just gonna tell us good bye.” After some convincing, I finally got him to sit up and watch his best friend give one of the best speeches I’ve heard. Well, who am I kidding, the man don’t really give too many bad speeches. He’s an, oratorical prince! And at the end, when the President stepped back, the flood gates opened for both of us. But they only lasted seconds because Jax and his seat mates screamed, “HILLLLLLARY!!”. The place roared! I looked down at Hippo’s teary face as he screamed and clapped. It was one of the best moments of my life. The Black President hugging the female nominee in front of my son. I was watching history. I was watching the future unfold, right in front of my eyes. My son didn’t understand what a glass ceiling is. And at that moment, I could feel the shards rain down on me like snowflakes. As I looked into his brown eyes, all there was staring back at me was hope and love. 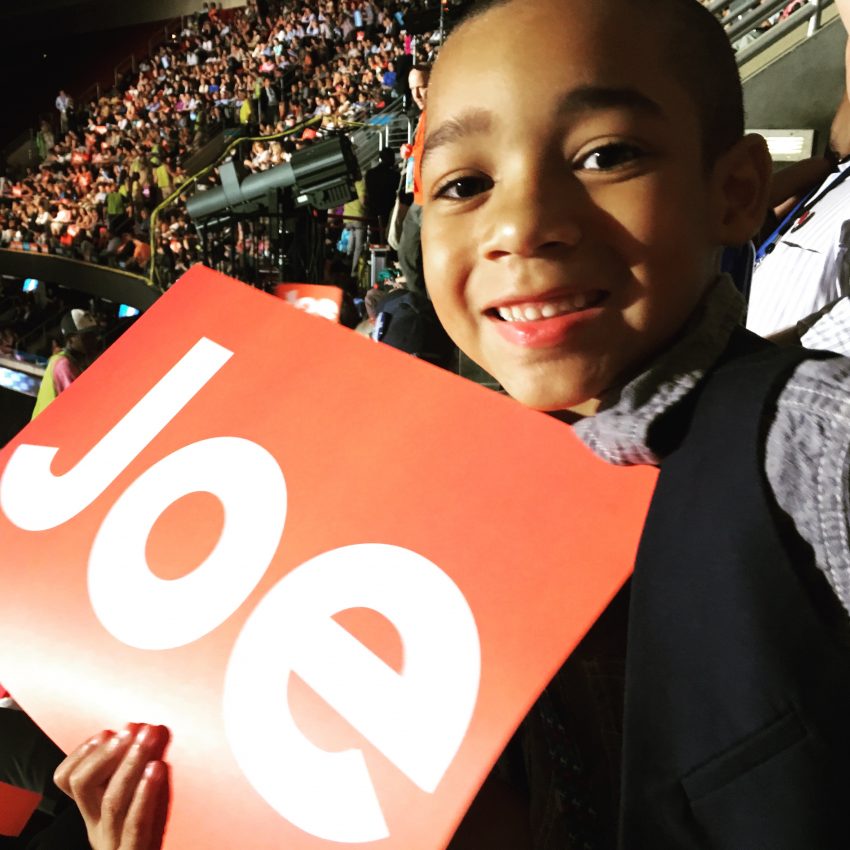