I recognize that my little bundle of nerd, is an exception when it comes to understanding and loving politics, history & government before it is required by state law. I also recognize that though he is active in his political education, there a lot of things that just fly over his head. I mean…he’s 6. But I love that he’s so active and willing to learn, because there a lot of things he can learn. In the age of this amazing technological revolution & historical election precedence, there is no better time to learn…at least the basics.

At the DNC, I found that Hippo’s world opened up larger than it could have in any other way. The exposure to a vast amount of people from all different regions of America, in such a short amount of time was worth every penny spent. I loved listening to stories people were telling him as we stood in line for food, or sat waiting for speeches, charged our phones or waited for transportation. He learned so much about how people live, what their needs are and why they choose the politics they choose. I watched my son ingest and digest the information. Form his own conclusions and relate them to the things he sees on CNN. Sometimes we get caught up on our own personal needs, we forget that sometimes laws are created to help boost and/or protect a way of life that we have never encountered. Coming from a liberal, blue state that houses his city where people sought refuge from Jim Crow in the 1950’s. He hasn’t had to live on a farm, or have parents with blue collar jobs. Hippo needed to understand just how much of a melting pot America is. The pictures in his reference books jumped off the page and began to speak to him. And then the questions began.

“Mom, do congress people have to be in the area they are voted in? Do they have to live there?”

“Mom, when you register as Democrat, can you still vote for a Republican?”

“Mom, can a Democrat President have a Republican in their cabinet?”

“Mom, how man parties have there been in history?”

“Mom is Parliament in, Mother England, the same as Congress in the United States?”

“Mom, can a President go back and be a Senator or a Congressman?”

“Mom can Barack Obama or Bill Clinton be in Hillary’s cabinet? Can Vice?”

“How do they make sure that the laws are enforced in the states?”

“That’s a state senator. Does he have the same job as, Senator Boxer?” 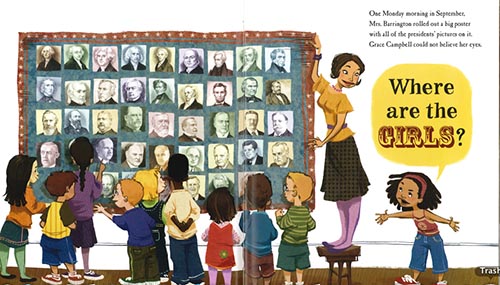 I often take whip the phone out for a quick google search to show him how to find the answers to his questions. But now I’m into being a little more proactive in our lessons. We spend a lot of time at the library, so during our library adventures I will search out books that have to do with the branches of government, presidents, congressional leaders, history, etc. etc. I love books from the, “Who Was Book Series“. The one on the White House has a map of the White House. It’s got great fun facts for the whole family, and it’s a great conversation starter. We also love the, “So You Want To Be President?” book which talked about all the Presidents in an easy way for Hippo to relate to. He seemed to find a little more humanity in the men, through this book. I also found a really great book written by Senator Ted Kennedy, (which I didn’t know about) written through the perspective of his dog, Splash. Splash was a distant relative of Bo & Sunny Obama; The President’s dogs. It was all about life on Capitol Hill. But long ago, for Hippo’s first birthday, I bought a book called, “Grace For President“…wait…maybe I did play a part in this obsession! LOL! Anyway, I bought it because it was all about this brown little girl running for school President because there weren’t any US Presidents that looked like her. I guess I wanted to make sure Hippo always had the courage to try something new, even if that meant being the first to do it. I was surprised to find that there are so many resources available. Another really great tool is School House Rock! I know it sounds so weird to go all the way back to when we were kids, but it’s an awesome tool! Hippo loves the music, it breaks things down for him to understand easily and I don’t mind listening to it over and over…and over…and over. There is a whole Election collection available on DVD or iTunes. Personally, I purchased them on iTunes so he can download them to all of the devices and watch them whenever he wants. I’m now on the hunt for an audio cd version for the car. If anyone comes across one, please, please, please let me know.

I want to emphasize that this post is not about partisanism or about supporting the Democratic party. It’s about making sure the next generation really understands what is happening in their country and global relations as far as the law is concerned. Sometimes we rely heavily on our school system to be the complete guide for our children’s education. But we are their first teachers and we are the compass for their lives, it really doesn’t take much to add to the education they are already receiving. It’s also about going that extra mile in recognizing what our children’s passions are and what their strengths are. That we can recognize them earlier than others will say we will. I see Hippo’s passions and strengths, and I just build on them. So, if he wants to be an actor turned fashion designing Senator turned President of the United States that has trained with the Secret Service and serves as a spy for The Company on his days off…then by golly, I’m gonna make sure he has all the tools and resources to make his dreams come true!