Some of you may know about Hippo’s love of national news stations & it’s journalists. I was the exact same way when I was growing up. In fact, I am still quite in love with Peter Jennings! Of course I’ve also grown to love Chris Cuomo, Don Lemon, Arthel Neville, Brian Williams, Chris Matthews, Robin Roberts, Diane Sawyer, Bill Weir, Rachel Maddow…okay you get the point…I love national news. I’ve past this love down to Jax. I think it’s because before preschool he was home with me everyday and for the most part I kept CNN, MSNBC or BBC on while he did his lessons or I was sick in bed with a flare up. If I was sick in bed with a flare up, quite often he was in laying in bed or on the couch with me if I didn’t have a nanny that day. So between Yo Gabba Gabba & Curious George, I’d catch a little bit of the Situation Room or Hardball, or something like that.

Anyway, Jax grew fond of some of these Journalists. But it was CNN & ABC News that stuck out the most to him. Not sure why, but those are his favorites. Yes, my four year old loves watching CNN’s The Situation Room w/ Wolf Blitzer & ABC’s Nightly News w/ Diane Sawyer! He’s such a huge fan Of CNN (what he calls Sienna News), that when he found out one of my mom’s clients moved over to CNN from Fox, he told all of his friends at school. He was so excited at the thought that she would possibly see Wolf Blitzer one day at work! My son LOVES Wolf Blitzer! I have figured out, for the most part, why my four year old loves Wolf Blitzer so much. 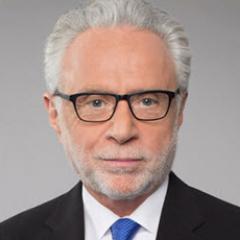 The man’s name is Wolf…Blitzer! It’s one of the reasons we all LOVE Wolf Blitzer.

Jax is convinced that Wolf Blitzer is Santa’s brother.

His name is Wolf Blitzer!

Wolf Blitzer did a segment on President Bush’s paintings of his dogs, which Jax absolutely loves. Yes, this liberal democrat (or demoCRAB as Jax says) has a bipartisan son who LOVES President Bush. Ironically he’s even taken up calling VP Biden, “Vice” just like President Bush called VP Cheney…weird! AND he said even though he’s a “democrab” and likes some “democrab pwesidents” , he wanted to know if it was okay to vote for a “repopelicun” for “pwesident”  too. I told him, that he should vote for the person he thought would help EVERYONE in the country. And that your political party & religion cannot make you a good or bad person, only you can do that. To which he answered good, because he liked some “repopelicun pwesidents” too and he may vote “repopelicun” when he grows up………. moving on…………..

Okay, so basically my son is a huge Wolf Blitzer fan. When he is home he watches The Situation Room while coloring or playing with his action figures. He asks questions and engages me during the hour long program (of course I mute or change channels when anything disturbing or too grown up is on.). So, in Jax’s mind, Wolf Blitzer is news. He knows it all and he shares it with the world.

A couple of days ago, Hippo asked me where did all of the Presidents live now (that they’re out of The White House). I told him where Former Presidents Carter, Bush, Clinton and Bush all reside now. But then it got weird. The following is based on a Hippo’s True Story.

Hippo: But what about Abraham Lincoln?

*silence* a look of shock and confusion crosses Hippo’s face. And in an over exaggerated interpretation of how an adult reacts to something shocking he replies:

Hippo: ONE HUNDRED YEARS AGO?! ARE YOU KIDDING ME?!!

He starts pacing with his hand plastered to his forehead, trying to process this breaking news. He starts mumbling “but” & “I don’t beweave dis!” and other phrases he is quite sure adults used when they are in complete shock! Then he turns on his heel to face his mommy again and says in a voice that is laced with bitterness, hurt and betrayal.

Then he storms out leaving mommy confused as to what just happened. Before she could let out the laugh that had been building in her throat, Hippo returns.

Hippo: Did he tell da Pwesident?!

And that ladies & gentlemen is the day that Lincoln died! R.I.P. President Lincoln. We love you!