Coolest Mom On The Planet

In honor of one of my favorite events, The White House Correspondent Dinner, I thought I would talk about one of Hippo’s favorite past times. Watching his favorite reality show, The West Wing.

You’re reading this and wondering if I’m talking about some new reality show about life in the West Wing of The White House on Bravo. Because the only other show called The West Wing on television was a scripted television show on NBC that ended over 10 years ago, starring Martin Sheen as the best President the US has ever had. There’s no way I’m talking about that show. When it was on Hippo wasn’t even a thought and it’s NOT a reality show. Well, thanks to Netflix streaming, Hippo has discovered President Bartlett and his brilliant, flawed, hard working, hilarious staff. And Hippo thinks it’s a reality show. No, I’m not kidding.

Okay, first of all, his mom is two steps from running for Congress and he idolizes Wolf Blitzer as the keeper of knowledge. He has also asked that along with being tall, funny & liking Star Wars and Star Trek, the new dad be a senator or congressman who graduated from Harvard. So, Hippo’s interest in politics is slightly stronger than the average five year old. Someone who is fascinated with all things Presidential and White House, would be entertained by The West Wing. And a five year old would assume based on the realistic tone and imagery of the show that it is a reality show. This is where we live daily. Walking the tight rope of old realistic Mr. Spock-like, geezer and innocent, fun loving, naïve five year old.
I have tried to explain to Hippo that President Bartlett is actually played by an actor named, Martin Sheen. He has seen Martin Sheen in movies and will recognize him as an actor. But then Ronald Reagan screwed me with this road of truth. Hippo is convinced that Martin Sheen is a name that Jed Bartlett used when he was acting before he became President…like Ronald Reagan. Thanks, Ronald Reagan! I have pointed out that nowhere in the list of Presidents is President Jed Bartlett. Hippo thinks it’s a mistake. A very rude & disrespectful mistake at that. Finally I ask, “When was President Bartlett, President then?” He simply said, “When you were younger.” I asked him if it was before or after Clinton. He said, “I don’t know. I wasn’t born yet.” Okay, you can’t be illogical and a smart ass! Pick one, kid!

So, a couple of months ago, my big sister Essence Atkins was celebrating her birthday with a small little get together at her house. In rolls one of her longtime good friends, Dule´ Hill, aka, Charlie Young from The West Wing. Now my sister is already the coolest person in Hippo’s eyes for many reasons. She’s his godmommy. She gave birth to his cousin. She’s funny. She’s makes really good peanut butter and jelly sandwiches and she’s married to a ninja (a blog post in itself). That’s all first and foremost. But what also makes her cool is my sister is friends with two Power Rangers, Darth Vader played her grandpa on a tv show AND she knows Charlie from the West Wing. Once he found that out, there was no telling him that his Tauntie was not the coolest person on the planet. Well, I’ve never been in competition with her…until that night! That night I saw an opportunity to become, “Totally Coolest Mommy Ever”! I saw it there! The title was in my grasp! So, I politely approached Dule´ and tell him about my little Hippo and his love for all things West Wing. And how he saw a picture recently of the cast getting together and was relieved to know that President Bartlett has forgiven Toby for “whatever he got in a lot of trouble for”. I also explained that I was on a mission to out “cool mom” my sister and this might put me in the lead. Well, Dule´(tickled by his young fan and the story) suggested a photo and asked me to tell Jax, that Charlie said hello! And that he would tell President Bartlett hello for him, the next time he (Charlie) saw him. 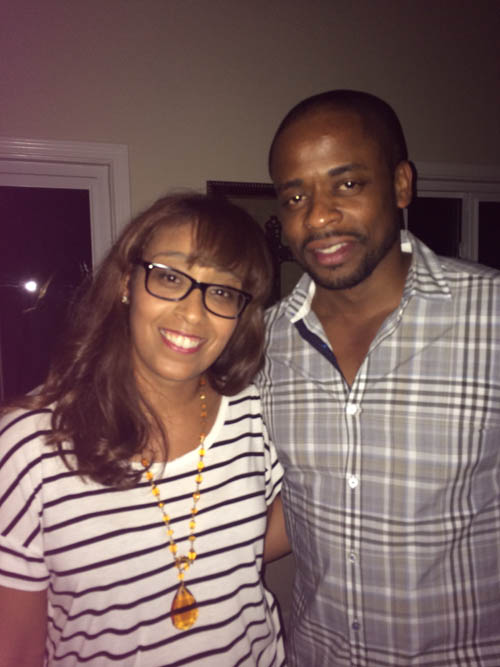 The next morning, I showed Hippo the picture. Then suddenly I remembered doing a play with Kathryn Joosten, who played Mrs. Landingham (who Jax LOVES), when I was in college. What happened? Let’s just say, my sister has had to relinquish her crown!

Ps. This might be one of the many reasons he and I both love the West Wing! Thank you Funny or Die for this amazing reunion and information on how to vote!