For The Love of Biologics

A few weeks ago I was privileged to enjoy the BioExperience, Janssen along with my fellow IBD Advocates friends. You might know them:

Janssen was nice & brave enough to open their doors to us for a few hours, giving us a sneak peek into the process of creating Biologics and Biosimilars. I say brave, because this group, well…they define advocacy. There is no holding back. There are expectations of a truthful answers. Part of the reason I love these people, is because they do truly take advantage of the opportunity to get all answers needed for our community. And their smart, capable and lovable people. So, we took over Janssen for a day. 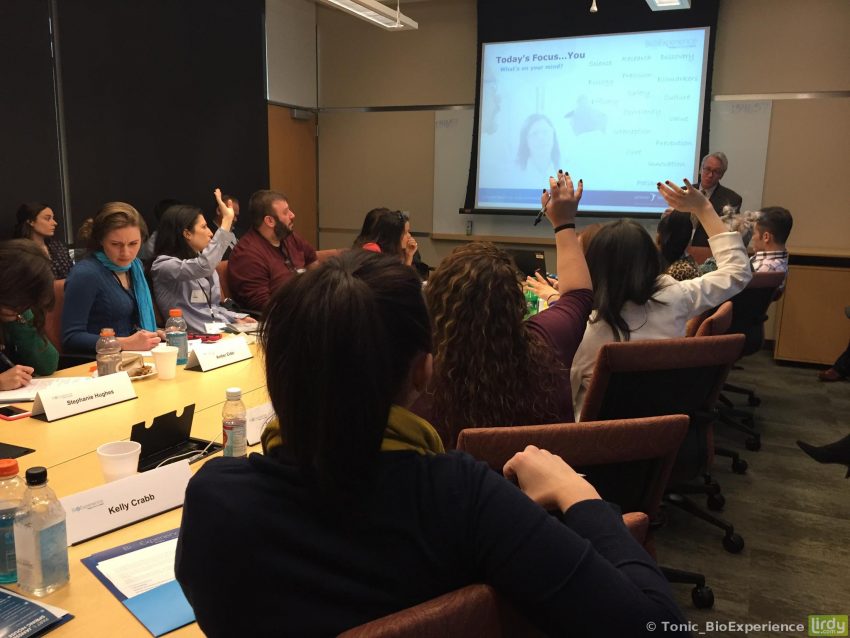 Well, technically, it was like a day and an evening. The first night we got there, we were welcomed by Janssen

& Tonic with a wonderful welcome dinner. I love these dinners because it’s a time for all the advocates to talk about their stories and blogs. For the most part I know everyone’s back story. But I like hearing them again. These people are so inspirational to me. We are a group of people that all have different backgrounds, but we can somehow relate to each other. The welcome dinner also gave us a chance to listen to Michael Yang, Janssen Immunology President, speak about the future of Janssen & biotechnology.

Before we get into the nitty gritty of the science and biosimilars vs. biologics, there’s something I think we should get out of the way. My personal feelings about pharmaceutical companies. As someone who struggled with not being able to get insurance for so long & having to come up with an extra $1,000 a month

just to pay for my maintenance meds (not including supplements or medications to clear up flare ups), I fell into the crowd that looked at companies like Janssen as the, “Evil Big Pharma Monster”. Why does it cost so much for someone like me to stay alive. Most people with chronic illnesses can’t work as much as they did when/if they were well…or they can’t work at all. So, income is measured or non-existent. Life with chronic illness is not easy. Okay, so now we have the Affordable Healthcare Act which forces insurance companies to at least take us. But the fight every month with them as they find loopholes to not pay for our medications because of technicalities and language, is exhausting. And if you are left with the bill, the first human instinct is to find something and someone to blame. And so, we turn to the closest punching bag, the pharmaceutical company.

As strong as I am in my opinions and convictions, I can also admit when I am wrong. I was wrong in my judgement of pharmaceutical companies…at least, where as, Janssen is concerned. The science behind biologics is beyond complex. But the scientists behind the creations of biologics, aren’t as complex. They are

simply passionate about changing lives. We were privileged enough to be able to chat with the scientists that spend 12 hours in a lab 6-7 days a week, living on call, having spent years on this project. The people we were meeting had been working at the campus for 8, 10, some 16 years. As passionate as we were about advocating for patient’s lives, they were as passionate about saving them. The amount of dedication and care going into each batch of, Remicade® was comforting. We could just stop with the gowning process! I started to sweat and panic just watching him put all of the stuff on. Then to know that he had to do that at least 6 times a day! SIX TIMES A DAY?! I’m not sure if dedication is really the proper word!  Because of the live biological cell element that goes into creating these biologics (get it! biological! LOL), the lab never stops.  So, at every moment that I am suffering, Janssen has someone working on improving my quality of life with the least amount of chemical as possible. They were transparent in answering our questions by showing us and engaging us in open conversations about the current state of the IBD community and medicine. As well as the future of the community and the path to find a cure. And a cure not in the common sense of the word, but the advancement of genetic testing and prevention. Logically, once a flower blooms for the first time, it will never go back to it’s original bud form. It may be able to close, but it will forever be altered. Once we’ve had the disease, the damage done cannot be reversed. Which is why the “J-Pouch Cure” theory is so irritating. Needless to say, after my #BioExperience, I saw faces in my bottles of Remicade® on Monday.

People have been asking about the differences of biosimilars and biologics. And like me, they were concerned that their doctor would be forced to change their medication because these, “generics” were coming out. Well,

let’s start there. Biosimilars are not a generic for of your biologic. A generic drug is identical to the brand name drug. Because of it’s bioequivalence,  these generic and brand name drug have interchangeability. Let’s say for instance, you take a, Tylenol® for your headache. Later that week your headache comes back, but you are at your boyfriend’s house and all he has is the Target generic brand of acetaminophen. You are perfectly fine with taking the generic version of Tylenol®, because they are identical in chemistry. This is not the case with a biosimilar. It is similar, but not identical. Interchangeability is NOT suggested. They are not equivalent, but highly similar. Similar enough to suggest, that if you have developed antibodies against Remicade®, you shouldn’t take it’s biosimilar product. However, they are different enough that you can do Remicade® one month and then the biosimilar the next month. The greatest fear (especially with this difference and inability to interchange) is being on a drug like, Remicade® and it’s working, but your insurance decides that the biosimilar is cheaper, so that’s the one they are going to cover. That question was brought up immediately to President of Immunology, Michael Yang. His response was truthful and fair, that Janssen would be working on ensuring that the “generic” myth is eradicated so that there isn’t a misunderstanding by the insurance company. The choice between biologic and biosimilar, should be made between patient and doctor. Not patient and insurance provider.

There are still a lot of questions to be asked and answered about biosimilars here in the states, as it hasn’t been approved by the FDA. And as a community of patients, caregivers, advocates and physicians, we are constantly looking for an improvement on the process of healing Inflammatory Bowel Disease. It would seem that the advancement of biosimilars is heading in that direction. And on the biologic path, it seems that improvements have been made in that area too. Today, the 11th Congress of the European Crohn’s & Colitis Organisation (ECCO) announced that the biologic, Stelara® (ustekinumab) has, “induced clinical response and clinical remission in adult patients with moderate to severe Crohn’s disease who had previously failed or were intolerant to treatment with one or more anti-tumor necrosis factor (TNF)-alpha therapies…” That, my lovies, is progress! And an awesome sign! I love that even though Remicade® is awesome and crosses so many immunological diseases, Janssen didn’t stop there. Whereas I respond to Remicade®, I have some friends who do not. They are suffering and feeling like there is no place for them to go, no more options. They’ve checked off everything on the list, including surgery. What now? Well, I guess, according the 11th Congress, STELARA®! Hopefully this means that soon, very soon, the US will approve it’s dosage for IBD. This is a step forward in the right direction, and a small celebration in the fight against Crohn’s & Colitis.

*Janssen paid for my travel expenses. All thoughts an opinions are my own.