Ah Sey One One Love Lounge

When people learn about my childhood and my parents involvement in the entertainment business, they expect a Lindsay Lohan-esque horror story. I can totally see what they’re imagining too. There’s one of those super 8 flicker in an orange hazy color images. Starring roaming the canyons with other hooligan hollywood brats saying no to our nannies and forgetting what our parents looked like because they are all in the backyard with guitars and aged wine being…artistic. Yea…not exactly. Not every kid in Hollywood has an E! True Hollywood Story experience. My life was pretty normal. Okay maybe walking home from school and finding Rosie Perez holding your new baby brother with your mom in the kitchen, is not all that normal. But I definitely didn’t have the Drew Barrymore experience…okay, I might have been in a nightclub or two, but I had a sparkling water in my hand and I was out as soon as my daddy’s set was done. Growing up in Hollywood was actually a GREAT experience. A blessing if you will. I’ve met and built relationships with some truly wonderful, genius, creative people. 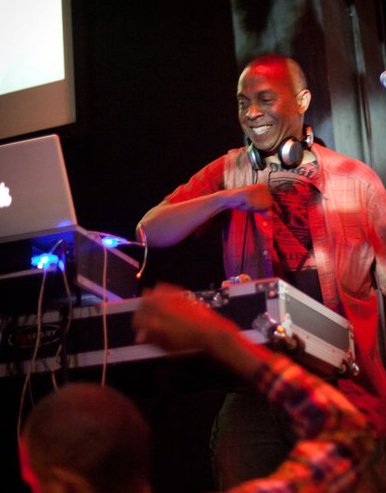 One of those people is really my peoples. His name, Matt Robinson. He is Holly Robinson Peete’s older brother. That’s right the Judy Hoffs. He’s Judy Hoffs brother and one of the coolest cats I know. Matt is a dj turned record label executive back to dj. I know right? Clearly the decks were calling him. Spinning under the name DJ Mattnifique, he “keeps the vibes nice”, as he says! I’m telling you right now, if you’ve never had the Matt Robinson musical experience, then you’re missing out! Truly missing out! Music is such an important part of all of our lives. It’s been used as a stimulant, a depressant, a form of communication and a form of prayer for centuries. It literally moves mankind. People who can create and manipulate music are true geniuses in my opinion. Not everyone is a musician, singer or DJ. These people have music flowing through their veins. They hear music in ticking of the car blinker and a baby’s cry. A good DJ can do this. And Matt is a good DJ.

Recently Matt left the main states to move down to Costa Rica, taking his soulful skills down south. However my homie (yes, I am still young and cool enough to say homie!) is back for the month of August. Los Angeles wakes up on the weekend and migrates to the coast. Fridays Matt hosts Funky Fridays at Sunset Restaurant in Malibu. Sundays he is hosting One Love Lounge all reggae from 4-8pm at the Whaler in the Marina. Here’s what I love about the way he spins. He plays the hits, old and new. And then he’ll sneak something in on you that you’ve never heard of, yet you find yourself still dancing. The groove never stops. I suggest you come out. Find a babysitter and make your way over to one of these events before August is over. You’ll thank me! Be ready to sweat and stay on your feet, so be comfortable. You can be cute later!