This probably sounds exceptionally obnoxious, but oh well. My kid is a genius. Literally, one of the smartest kids I’ve ever known. I use to babysit a little boy who went to Mirman, asked all kinds of questions I wasn’t prepared to answer and never found anything intellectually challenging. He was also one of the most loving, funniest, charming kids I had ever known! He and his little brother were my hearts! Hippo reminds me so much of Bubs & Sweetpea (the little boy and his brother). He is very social, very loving, and exceptionally smart. And of course it’s nice to be able to say, “Yes, we are on The Hardy Boys series now.” or hear him add up items he wants to purchase or answer questions about American History and foreign policy. I mean it’s actually pretty cool to have your five year old tell you that you forgot to mention Gerald Ford, when rattling off the last 15 Presidents.

But like good ol’ Uncle Ben said to Peter Parker, “With Great Power, Comes Great Responsibility!”. To be honest, all this brain power Hippo has is a bit much for him…and ME! I think more so for me! He.Wears.Me.OUT! Exhausted! Confused! Annoyed! Frustrated! I never thought I would say this, but I think my kid is too smart! He’s like annoyingly smart! I can’t surprise him because his five year old self is nosey and goes through my phone. And then his 16 year old self will read it and take it all in. And then his 65 year old self will tell me that he read and dare me to try and get around the truth of it! And then he talks back! But in his talking back, he makes sense! Like, perfectly logical reasoning. And we both know he’s somewhat right, but I am the only one who understands that right now his answer is not going to work. Because as smart as he is, he is still only 5 years old. So his powers do have a limit…but not enough of a limit for me. I literally find myself arguing with him more than I argued with his father! HAHA!! He’s constantly thinking, moving and over analyzing. And at the end of the day I find myself drained. I feel like I’m living an unending episode of Pinky & The Brain.

Someone told me the other day that I should count it as a blessing that Hippo is so smart. I do, don’t get me wrong. I am proud of my little Jimmy Neutron. But it doesn’t make parenting easy. My daily tasks consist of keeping him stimulated, challenged and happy take a lot of creativity and thought. I also have to remember and force him to remember that he is only five. He still needs a stroller when we go to Disneyland! I have to remember that even if he does compare sharing with his friends with America putting sanctions on Russia, he is still in kindergarten. That next to being “best friends” with Vice & The President, his heroes are Brobee & Rainbow Dash! ………*sigh*………thanks for reading my rant. I’m off to go relieve Hippo’s teacher!

Gee, Brain, what do you want to do tonight?

The same thing we do every night, Mommy – try to take over the world! 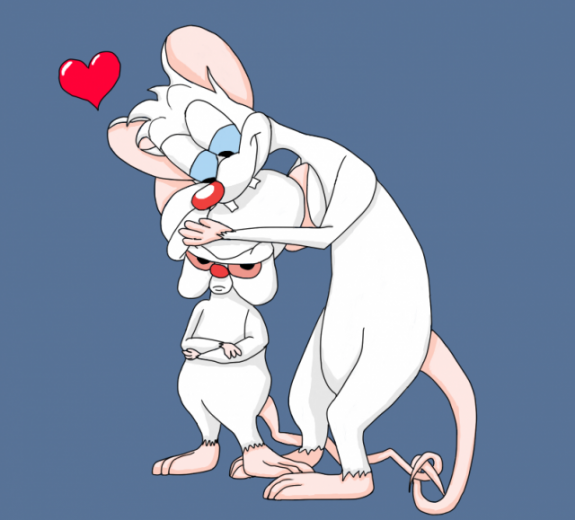