The Invasion Of The Croods ~Giveaway Alert

Oh my goodness so I am still on my Dreamworks Animation Tour high! A few weeks ago I had the opportunity tour the Dreamworks Animation Studio in Los Angeles. As a someone who went to film school and has followed the careers of Jeffrey Katzenberg and Steven Spielberg, being that close to the magic was…AWESOME!!! In fact when I shot my very first film I wore my mother’s Dreamworks SKG hat for good luck! Yes, yes I did. But I digress.

So, in anticipation of the epic release of The Croods on Blu-Ray DVD Combo Pack (TODAY), they had a super awesome media day! Now I’ve been to some media days and they are all pretty awesome because they give  you a full feel of the film and what happened behind the scenes. But I have only had this kind of campus experience at one other place, Skywalker Ranch, for a school sponsored trip. The Dreamworks Animation campus is truly awesome! In fact I’m trying to figure out how to draw so I can get a job there. The atmosphere is serene and creative, tranquil and peaceful. The food was yummy and healthy. And all the employees we encountered were great, including THE MAN himself, Mr. Jeffrey Katzenberg. He totally interrupted our tour and I think I was the only nerd who recognized him on the spot. The nerdy film student totally came out in me! And this was just a portion of the day.

Okay so let’s see I might as well just highlight some of my favorite parts of the day. Okay, well of course there was the meeting of creators Kirk DeMicco & Chris Sanders which was very cool because Chris Sanders created, Lilo & Stitch which is Jaxon’s favorite movie. Lilo & Stitch really got Jaxon through me and his dad’s break up. What I love about the movie, which the creators found surprising, that no matter the culture or genesiology you can relate to The Croods family members and it’s dynamics. It’s such a universal and creative film. The creative liberties

they took with imagery and original animals like the Mousephant, Abominable SnowKoala & my favorite, the Macawnivore: Chunky. Chunky is a larger than life Tiger/Sabertooth Tiger that looks like a Parrot from the side that was orignially thought to be the antagonist & main animal. However, a little furry guy won everyone’s heart with a simple phrase, “Duh Dun Daaaa!” And that is Jax’s favorite character Belt. Chris & Kirk explained that after the initial pre screening they had to actually go back and had some rigging to the Belt character because he wasn’t suppose to move so much. But the audience reaction to Belt, forced their hand. And we are so glad they did.

So after a quick clip review and introduction by the directors, we went off to a sketch class where we got to sketch Belt, A Mousephant & Sandy. I think my AAU sketching 1 professor would be very proud of my work…it’s definitely gotten better over time! LOL! We then went on a cool  tour of the Dreamworks Animation campus, which is more like a house of zen with its waterfalls, rivers, and koi fish, than a studio. We also got to see how they do the live action capture with actors acting out a rough skit of the script for animators. They basically take this rough live action skit and guage the spacing between the characters, shadows and basic human movements to mimic in the creating of the characters. It started to sink just how much work it actually takes just to do one animated feature film before it event gets to the character graphic design and the week-long rendering. There is a lot of research and time that goes into the story. When asked about how to direct

an animated feature, Kirk and Chris told me that it’s about building and rebuilding the story that is ever-changing, unlike a motion picture with live actors where there is a clear-cut and dry format. Animation is always changing and with very few limitations. We then got to visit the amazing voice over studio. I’ve been in quite a few studios over the years and only one was I ever in awe of. That was the studio space at The Capitol Records building. But this studio space definitely took a close second. The acoustics, the recording gear and the deck are some of the best engineering equipment I’ve ever seen and that is available. They are truly at the top of the game at Dreamworks Animation. Then there was lunch which was very good and made me totally jealous of everyone that go to work there. Apparently the company provides breakfast and lunch free for employees everyday, as well as yoga and fitness classes. Seriously? I think it’s time I go back to school for a graphics class!! I’m only half joking! LOL!

The last thing we did was design and create our own Uggs with paint & beads! Now, needles and thread are NOT my friends, but they had a great fashion blogger there, Mr. Kate who helped with our designs. I also want to thank Uggs USA for the boots for Jax! He is so excited to wear his when it gets a little cooler. I love Uggs because with IBD I often have pain on the bottom of my feet and the warm cushion they provide, helps with walking around with Jax during my arthritis flare ups.

When I got home, Jaxon was beyond excited by all the cool swag I got for him during the media day and the fact that one of his favorite movies is coming out on DVD! And with that you know I have a… GIVEAWAY!!! Enter today by emailing info@crazycreolemommy.com your favorite Croods character or tweeting us with #TheCroodsDVD at @crzycreolemommy for your chance to win a copy of The Croods on Blu-Ray DVD Combo pack. You must be a subscriber of The Crazy Creole Mommy Chronicles to be eligible to win. Enter by October 10th!! 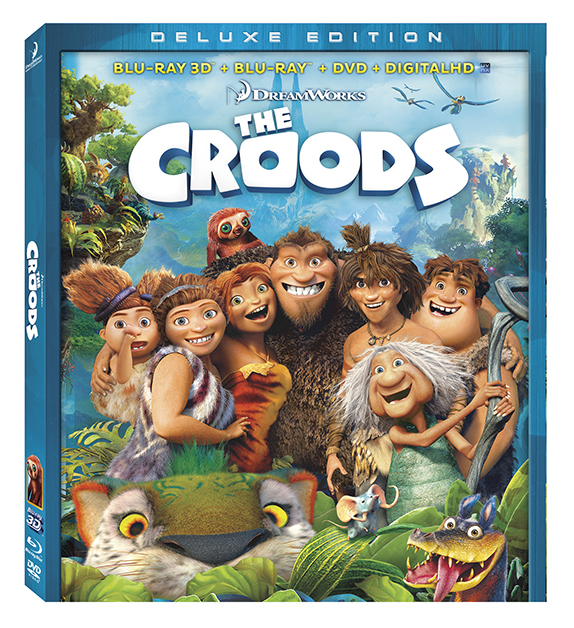 « My Little Bitter Hippo Cyclops» The Doc Is In!!