A couple of weeks ago the angry bitter cyclops, also known as The Hippo, Jaxosaurus, Jig Master Jax, Jaxxy Boy,

Jaxomus, Jiggidy, Jax, Jaxon Lee Coltrane, Coltrane Cutt, and just…Jaxon was staring me down with his good eye daring me to say something to him. You see by this time he had been cooped up in the house without company, his dog or much activity. I was his playmate, chef, jailer, and evil eye drop dropper. Basically my son was over me and over it! His patience with me began to wear thin…very thin. I didn’t know how I could possible redeem myself after this!

But out of the dark looming clouds of despair and bitterness came a beacon of light in the form of a little animated girl with an entourage of stuffed animals. THE DOC WAS IN!!! That’s right Doc McStuffins was coming to town.

So I packed up Jiggidy and headed over the hill to the Grove on 3rd. As soon as we landed, it was like I had whole new kid! He heard the theme song, saw the party masters from Radio Disney and the countless sick stuffed animals and suddenly my old Jax was back. Instantly I was back in his good graces, I was “the man” again, he liked me…he really liked me. It might sound like I was trying to buy my son’s affection. After two weeks of being stuck in the house with one another, not able to do much, and having to attack him with eye drops three times a day… I was. I’m not ashamed to admit it, I wanted to be mom again and not a feared and hated nurse.

Doc McStuffins mobile check up trailer and use her tools to give Satchmo a check up. He was going to be Doc. After we went through the mobile, the kids got a chance to socialize, dance and learn about healthy eating. Then we met up with some friends

and stood in line to meet Doc. Jaxon got to introduce Satchmo to Doc, take a picture and chat with her. But the real moment came (which I TOTALLY MISSED WITH MY CAMERA!! AAARGH!!!) when Doc McStuffins grabbed Jax in an embrace and kissed him on the cheek! He almost fainted! I’m not even joking!! The smile on his face couldn’t have been wiped off…it was tattooed on. He barely let me clean his face later that night!! HAHAHAHA!!!

Oh Doc McStuffins, you are not only a hero for young girls. You are a helpful tool for parents to guide their children into healthy living and eating. You are also an inspiration for young boys as well. You inspired Jax to be diligent about his eye surgery recovery, to eat healthy and be kind to others, even toys. The event was truly awesome! They had female African American doctors walking around talking with the kids. There were lab coats for the kids to borrow as they gave their toys a check up and treat boxes for the kids to take home. I hope next year, Doc can come for maybe two days and they could open up the area a little more so that more people can enjoy and maybe have more healthy activities. Can’t wait for the Doc’s next visit! 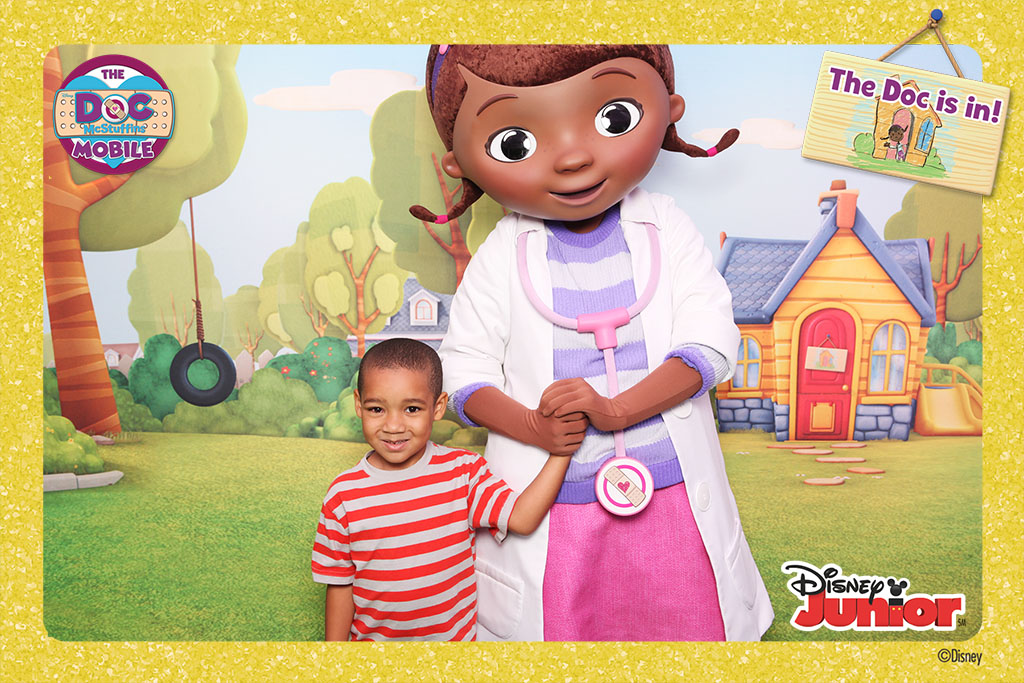 « The Invasion Of The Croods ~Giveaway Alert» Hippo Is 4!