Arming Your Teens With The Tools Of Knowledge

I don’t have a teenager. But I was once a teenager and therefore am afraid to have one! Being a teenager today is a lot different than it was for me. I don’t know if it’s harder or easier, it’s just different. By the time I graduated high school, I still had friends who only had one computer per household. I was still told to write my research papers in a library using the Dewey decimal system and the large Encyclopedia Britannica’s. In fact when I graduated high school, my mother still had her encyclopedia collection on the bookshelf for quick reference. Everyone had dial up and AOL and NetZero were battling it out. I only knew two people in school who texted and only 20 people who actually had cell phones. I was included in that, but that was only because I travelled often with my speech and debate team, and that was usually when I used the phone the most. Almost everyone else who had one, had one because they had a car and they usually kept their phone in there. LOL! Times were different! We had information, but not at our finger tips. There was no twitter or CNN Breaking News texts. And yet, we still got all the basics. Everything we needed to know to be educated, responsible citizens was made available to us. Sex was still a mystery to all of us, really. Sure we might have stayed up late at sleep overs and watched Cinemax with the sound off. We thought we were grown ups by sneaking up to Mulholland Dr. and necking in the back of cars. Then there was getting to second base at the back of the movie theatre. Next to the hollowed out human body with the parts that would fall out as soon as you touched it in Science & Health class, and the demonstration of how to put a condom on by your extremely old health teacher who didn’t look like he had ever had sex in his life… this was the extent of our sex education.

Now? Kids are sexting and take graphic photos to post on their social media pages. Our television and music have lost the idea of innuendo and just throw sex in our faces. You can get cosmetic enhancements for a discount to lure in a sexual partner. The teen pregnancy rate has gone up since I graduated 11 years ago. Why? I actually don’t understand why. These kids have access to information on STD’s right there at their finger tips, burning up their smart phones? Yet, if you ask the average teenager after contracting a disease or getting pregnant, they totally don’t understand how they to where they are.

A lot of kids don’t event think that AIDS or HIV still exists. A 16 year old once told me that AIDS stopped spreading “way back in the day…like ’93 or something!” HUH?! Well he also didn’t know that the We Are The World featuring Justin Bieber was a remake of the Lionel Ritchie/Michael Jackson/Quincy Jones classic. He also didn’t know what the apartheid was! Frightened yet? Yea, He really didn’t understand why I was trying to talk to him about AIDS. Most people believe that the numbers on contracting the disease have gone down…but really they’ve just changed. People keep saying, “It’s not so much an epidemic anymore!” But that’s only because people are not immediately dying off. People are now able to live with it, but it’s not cured. It hasn’t gone away! The scary part is that there are adults that believe that as well! Or that there is a cure. Or that it just simply will never affect them because of the people they choose to partner with.

Saturday December 1st is World AIDS Day and it’s been about 31 years since HIV/AIDS has taken over our worlds and it’s time to reintroduce it! Re-educate! Re-learn what the AIDS Virus really is. Maybe because we were on the heels of the initial widespread panic and personally witnessed people drop like flies because of it, that my generation understood and respected the disease. Now? It’s been forgotten. It truly has become the silent killer.

If you have teenage children who are either sexually active or will be soon and you live in Los Angeles, I suggest heading down to the West Hollywood Library for One’s AIDS at 31: Looking Back/Looking Forward exhibit. It’s a look at the disease and how it has and continues to effect our culture. Our kids need to understand what HIV/AIDS meant in the 80’s, 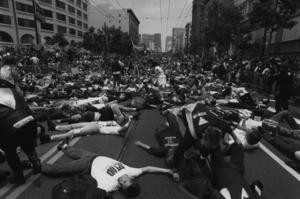 the 90’s and what it means to today. Maybe you’re not ready to talk with your kids about sex and AIDS, well, they’re not ready to deal with the responsibilities that come with having sex. But they are still having it! So arm them with a little more knowledge, a little more power! If my son were old enough to understand disease, I would take him to this event. We’d walk through the exhibit & watch the films. Then I would take him to dinner and talk to him about what he saw, what he knows and answer any questions (no matter how uncomfortable) he has to the best of my ability. AIDS is still killing and it doesn’t discriminate! This is something that I am very passionate about. Not just as a mother, but as a daughter, niece, friend, cousin, lover… Yes, my family has been personally afflicted by AIDS. But my community has been devastated by this disease. I could be next. My son could be next. My mother or my brother. Anyone. You, reading this. People shouldn’t still be dying from this disease. It can be helped! It can be killed…with education! It starts with our babies. This generation can change all of that! Help your children save themselves! Silence & fear can be a killer!