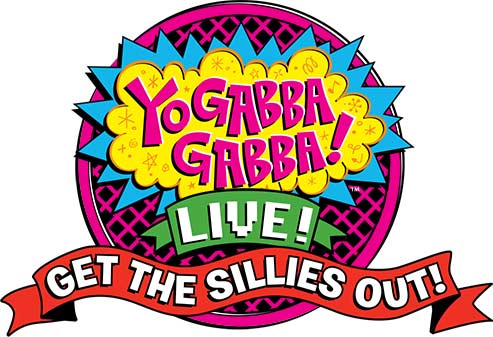 Last Friday I took Jax to Yo Gabba Gabba Live: Get the Sillies Out! Now leading up to the concert I began preparing myself for the noise, chaos and boredom that usually comes with one of these kid live performances. I mean let’s face it, no one ever wants to go to these things. It’s bad enough having to see some of these kid’s movies and shows. Having to be locked into an hour long live show that has kiddie music seems like pure torture. Talent Shows, Circus Events, Live Music Events, etc. that I am now being subjected to only makes me feel bad for my mother and anyone else who sacrificed their sanity for our joy! So, here I was about to hang out with a bunch of screaming toddlers for Yo Gabba Gabba live. Now, Yo Gabba Gabba is one of the better kids shows, I can actually stand it. But an hour of it? Hmmm… yea, wasn’t sure about that! Then there was the craziness my son was going through as the days approached! And then the day of, he was an absolute nervous wreck! You would have thought he was getting ready to have a sit down dinner with the President of United States. We arrived at The Nokia Live and it was pure MADNESS! There were tiny Brobees and DJ Lance Rocks all over the place! Everywhere you turned there was a place to spend money and feed the machine that is the Yo Gabba Gabba fan! My son fit right in! He was completely overwhelmed by everything around him, it was like a Yo Gabba Gabba wonderland… He was home! LOL! Once we got to our seats, we still had about 3o minutes before the show would start. The LONGEST 30 minutes OF MY LIFE! Every two minutes he was wondering when Brobee was coming out. Then when I tried to distract him by taking a walk, he wasn’t having it! He was afraid he was gonna miss Brobee! He couldn’t decide if he wanted to sit or stand…he was a mess!

Suddenly the lights went down and his eyes and mouth got bigger and bigger the darker it got! As soon as the logo came across the stage it got quiet! Literally silent except for some walking. The only people talking were the parents…the kids knew what was coming. As soon as DJ Lance Rock came across the screen I swear my son and every other preschooler in the place LOST THEIR MINDS! The roar was deafening! For a second I wasn’t sure if I was about to see Michael Jackson or The Gabba Gang! No seriously, these children were losing it! Screaming! Jumping! Reaching toward the stage! Crying! My son looked like one of the crazy ladies on the Oprah’s Favorite Things Show! Once DJ Lance Rock entered the actual stage live and in the flesh…I knew it was only a matter of time before my son’s head would explode!

Now I will say if you are going to spend money on a kid’s concert…THIS IS THE ONE TO GO TO! This Crazy Creole Mommy had an absolute BALL! The energy of the kid’s was absolutely infectious! The music was fun and danceable! The guests were great! And Biz’s Beat of the Day was off the hook! He did a mini set and the kid’s went wild! I danced right along with Jax and his “friends”. Two things you have to be prepared for:

A. Dancing for an hour. Get in shape before attending.

B. The meltdown of your Gabba fan as they sing the Goodbye song to The Gabba Gang. Jax was SALTY! Boy he was mad he had to leave! LOL!

This year we didn’t have the VIP passes to go take pictures with the characters and I think I will be saving up to do that next year! They have a whole little after party for the kids that includes pictures with the characters. Last year when he went with his dad, we did that. But it was a little overwhelming for him. This year I think he was at an age where he could handle it. So, next year when the gang comes back, we will be doing a the after party! The show is currently traveling and I suggest you get your tickets! I promise you will have as much fun as your little one…if not more!