Such a weird title, right? What does your level of empowerment have to do with Congress? Well, after last week’s election most of us were left feeling befuddled, bewildered and blind sighted. Wasn’t so much about the politics. Politicians win and lose all the time and we move on. But as a single mother of color living with two autoimmune diseases, this election period stirred up frightening beliefs in people that absolutely affected me and my child’s health both physically, mentally & emotionally. Why am I being so dramatic? Not so much dramatic as I am being realistic.

Wednesday morning when I woke Hippo up, he immediately asked who won. Once he found out he immediately asked me questions that had nothing to do with policy, but were based off of things he heard at President Elect Trump’s campaign rallies. Mostly having to do with people of color and of the muslim religion. We are a mixed race/mixed religious family. We are of African, French, English, Spanish, Native American, Canadian, & Cuban descent. We are Catholic, Baptist, Muslim, Presbyterian, Jehovah’s Witness and Episcopalian. We are Liberals, Moderates & Conservatives. We are gay, straight and bi. We are married, single, divorced and figuring it out. We are all outspoken. We are special needs, chronically ill, perfectly healthy and unborn. We are charismatic, creative, intellectual, compassionate, and progressive. Our holidays and family get togethers a cluster of fun, diversity and very loving. And so because of this, Hippo is a ball of empathy and thought. Everything anyone says provokes question and consideration in his mind. But not once, has my son ever felt like he was less than or a target of anything negative. Until last week. He had questions about how would someone not mistaken him for a person of a certain religion that they hate and hurt him? Who would round up all of these people and take them away, and what would stop them from taking him away since he favors other brown people. He’s an actor who is fair skin and racially ambigious, he knows he can be mistaken for most races with brown skin. He asked about healthcare and would I get sick again. He asked about fighting against the things that would hurt us: Racism, Bigotry & repealing of ACA. I told him it would be, us. We would fight. We will take our fight to Capitol Hill, we will not let fear silent us.

What I told my son is that no matter who is the President, this government was created for the People, by the People! We are the people. Our government works for us. But these congressional leaders cannot know what we need if we do not tell them. So, it’s time to empower ourselves and our families by taking it to Congress!

Tonight, I will be cohosting a twitter chat with the CCFA about advocating through legislation and policy. It’s all about how we can directly affect change for our health community. Please join us! Don’t give into fear or rhetoric. There is a way to stay involved in our government. Your voice can impact a thousand people who are unable to speak for themselves. Come learn how! #IBDCHAT 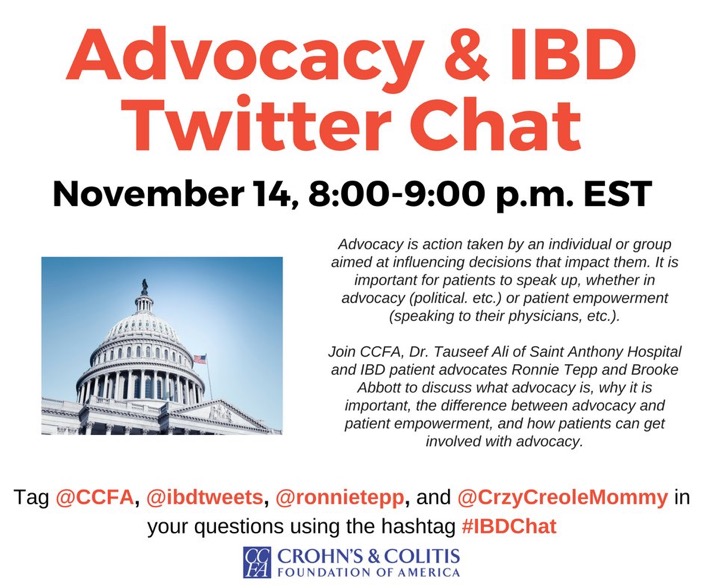